We just released a Feb. 5 '89 prototype of DuckTales for the NES!
If you'd like to support our preservation efforts (and this wasn't cheap), please consider donating or supporting us on Patreon. Thank you!

The Legend of Zelda: Ocarina of Time

From The Cutting Room Floor
Jump to navigation Jump to search

Using GameShark codes, you can equip the individual elemental arrow icons to the C buttons, rather than having the magic combine with your bow. These items are used for display only on the pause screen, but function as normal elemental arrows. 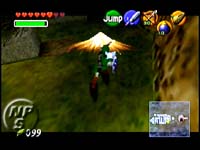 In pre-release screenshots like the one at right, Link is seen using a beam blade attack similar to the one he is able to use when his hearts are full in previous Zelda games. While this attack never made it into the final version of the game, remnants of it still exist in the code. The beam blade can be partially restored in the game using these leftovers.

Dark Link may be the enemy with the most extensive coding in the game, and the programmers certainly considered all options. Notably, he reacts to the player casting Nayru's Love, which will cause him to shield a lot and generally get out of the way, even though you cannot normally get that item before defeating Dark Link since it's located outside the Desert Colossus, which requires crossing the Haunted Wasteland, which in turn requires either the Longshot (obtained from beating Dark Link) or Hover Boots (obtained in the Shadow Temple, which can only be accessed after beating the Water Temple). This behavior can, however, be seen in the Master Quest version, since the Longshot is obtained much earlier in the Water Temple, before Dark Link is fought.

Seeing as the actor is just a shell which inputs buttons to the Link actor, Dark Link can also swim and dive in water, as well as climb ledges. If you are Young Link, Dark Link can also use crawling holes. However, because Dark Link has no animation for getting hit while swimming, it will instead cause him to slowly float to the sky.

In the pre-boss room before Twinrova in the Spirit Temple, Link fights a brainwashed Nabooru inside an Iron Knuckle's armor. If you position the camera so that it clips into this Iron Knuckle's model, you will see Nabooru's head. If you do the same to any other Iron Knuckle in the game, you will also see a head that looks similar to Nabooru's with the same textures but has significantly different structure and design. The head is wrapped in chainmail, which covers almost everything below the nose. Also, due to the way the head is modeled, the head has no eyebrows.

The most interesting differences are that the earrings are texture-less gold hoops and that the design of the head ornament is different. This alternate head model is either an earlier version of Nabooru's head, or it was meant to be directly revealed in the same way as Nabooru's, showing that all Iron Knuckles are actually Gerudos.

Either way, regular Iron Knuckles vanish when defeated, so their true face is normally never shown. The head itself was removed in the 3DS remake, but it's still present in the model, just not in-game (with the logical exception of the one that Nabooru actually comes out of). However, when they shed enough armor in combat, a distinctly human neckline can still be seen in all versions (including Majora's Mask).

"SOLD OUT" is an icon that is normally only displayed in the Bombchu Shop in the Back Alley for Bombchus that you have already bought, as well as the inventory menu after selling a mask. However, if hacked into Link's inventory as an item, it works exactly like the Master Sword because it's linked to the same action (0x03). The GameShark code 8011A638 002C (US 1.0) adds SOLD OUT to Link's B button.

Inside Child Malon's actor file, there are three lines of code that spawn her in Talon's House at night after completing the quest to wake Talon in Hyrule Castle. However, Link cannot normally enter Talon's House at night. Trying to enter the door spawns a dialogue box with Talon saying that Malon is sleeping. Even if the player were able to bypass the dialogue box and enter the house via hacking, Malon would still not appear, because the map does not load an actor or object for her.

However, adding her actor and object to the map and bypassing the dialogue box shows that Malon exhibits the same behavior as she does when she appears in Lon Lon Ranch during the day, teaching Link Epona's Song.

The Song of Time blocks in the Ice Cavern (in the room with the block puzzle) defy this logic as they are not present either as child or adult until you play the Song of Time to make them appear.

Nearly a decade after Ocarina of Time was released, a debug version of the game's Master Quest spinoff was leaked. The ROM was used by testers at Nintendo of Europe to test Master Quest prior to its GameCube release.

Decompressed by default, it had many debug features that weren't present in the retail versions of Ocarina of Time or Master Quest. These included a memory editor, audio debugger, and a number of test maps.

While the retail version of Ocarina of Time does not contain as many debug features as the prototype, a few are still present.

The Map Select allows you to go to any area in the game. See the Map Select section of the Debug ROM article for a detailed analysis. 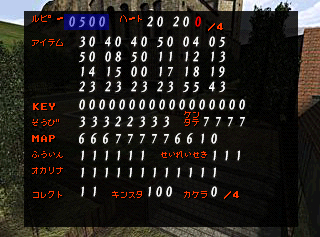 To activate it, use the code and press Start on Controller 1 to open the Pause Menu, then L to open the Inventory Editor.

View the Inventory Editor section of the Debug ROM article for more details. 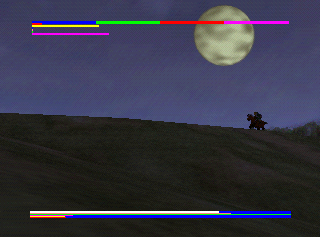 On the title screen, pressing D-Up, D-Down, D-Left, D-Right, Start, B, C-Down, L, C-Right, C-Left, A, C-Up, R, Z on Controller 3 resets the save data. This can be used in case the save data was corrupted, which could cause a crash on the file select menu. After the first input, there is a 16-frame timer for hitting the next input within the sequence (which reverts the timer back to 16 with each correct input).

A build date can be seen in the crash debugger and can be found in memory.

The game checks for the presence of the CIC6105 security chip and uses countermeasures if it is not found.

en_zl2 is the actor that controls the adult Zelda seen in most cutscenes. If a CIC6105 is not detected, en_zl2 will reshape Zelda's hair into a giant golden pentagon. This can be first seen during the cutscene in which Sheik's identity is revealed. 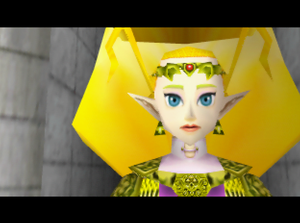 bg_zg is the actor that controls the bars in Ganon's Castle which block the exits during the escape sequence. Normally, Zelda is able to open the bars, but if a 6105 is not detected, then the bars will not open. Zelda will instead run straight through them and leave the player behind to die. This makes the game impossible to complete.

z_fishing is the actor that manages the fishing pond minigame. During the actor's initialization routine (80A3514C in NTSC 1.0), it tests if the CIC6105 exists. If it doesn't, then the routine that determines if a fish will stay hooked will force the fish to always let go after 51 frames.

An add-on was originally planned for Ocarina of Time. Known by the development nickname Ura Zelda, this expansion would make use of the 64DD, a disk drive accessory for the Nintendo 64. 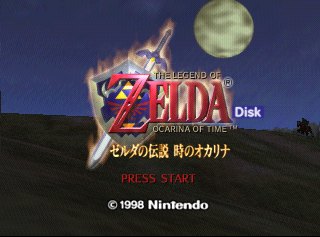 It is possible to trick the game into believing you have inserted an Ura Zelda disk. This can be done with a Japanese-region Ocarina of Time ROM by changing the bytes at 0xB9CCD0 from Ocarina of Time's identifier, EZLJ, to the identifier of another 64DD disk in your possession. The game will then recognize the 64DD disk as Ura Zelda.

This will cause the game to display a Disk tag on the title screen. In addition, save files with Disk tags appended will no longer be greyed out. However, the game crashes if you try to load them, perhaps because it is trying to access non-existent files on the disk. 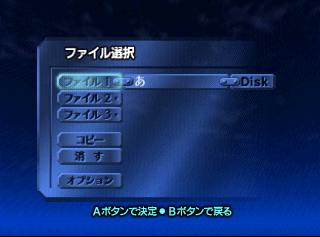 By using the codes below, it is possible to append a Disk tag to your save file.

The tagged file is greyed out by default and cannot be opened unless a 64DD is attached to the system, and the game is tricked into thinking you have the correct disk inserted using the method detailed in the section above.

The retail version of the game contains two Map Select entries that were presumably used to test the 64DD add-on.

The first entry is 64DD TEST n64dd SetDiskVersion. Selecting this option normally freezes the game. It would've been used to enable the 64DD Mode in the game. However, if you have a 64DD attached to your system, the following message will be displayed:

No Ura Zelda disk has ever been leaked, so it is impossible to test this option using the right disk. If you insert another 64DD disk, the following message appears:

The second entry is 64DD TEST2 n64dd SetDiskVersion. Selecting this option has no effect, even if a 64DD is attached to the system. This would've turned off the 64DD Mode in the game, hence why it does nothing.

Error messages indicating that the wrong 64DD disk is inserted are another relic from Ocarina of Time's past. This text can be found starting at 0xB9CDF0 in a decompressed 1.0 ROM. The messages were even translated into English.

These messages can be viewed on a decompressed US-region Ocarina of Time ROM by attaching a 64DD to your system, then changing the bytes at 0xB96B0A in ROM (or $1D2C5A in RAM) from FF FF to 00 00. If these bytes are not changed, the N64 enters an infinite loop while checking the region of the attached 64DD. This is because the region of the attached 64DD is, by necessity, Japanese, as the accessory never got an overseas release.

Ocarina of Time 1.0 contains a file called ovl_64dd that performs the following functions:

ovl_64dd would have rewritten the following files with files on the Zelda disk:

Additionally, the room files for these scenes would likely also be replaced, since most rooms reference textures stored within the scene file.

The following files contain no data and were blanked out before the game's release.

Some guesses as to the purposes of each file can be made based on their filenames:

All versions have a byte which stores what language to use during play, but in the Japanese/US releases the language cannot be changed. The following GameShark codes will set what language is used.

The same thing in the iQue versions. 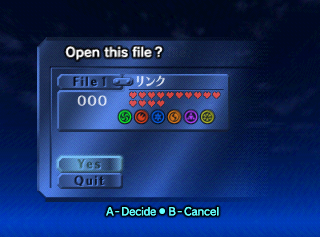 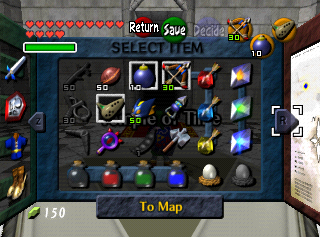 While technically not unused itself, the title screen is actually using a debug save file. You can access the save file with the below code. This will give you all equipment, songs, and most upgrades. The file name will spell リンク (Link in Japanese). Make a save file in slot 1 with the code on.

The logo has a Japanese subtitle, in the Japanese version.